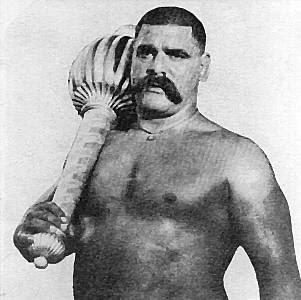 Pehlwani also known as kushti is a form of wrestling that is practiced by people in both India and Pakistan. It was inspired and a mixture between Malla-yuddha which is the Ancient form for wrestling in South Asia together with Shastar Vidiya and Mongolian wrestling traced back all the way to the 5th century BC which form the modern Pehlwani.

No pehlwan (Phelwani Practitioner) have not heard of the name of Great Gama, won the World Wrestling Championship in year 1910 and was remain undefeated with only a draw in his whole entire career as a wrestler and even featured in Shadow Hearts: Covenant.

Not much know about this but during the 1960’s, India was ranked among the top 10 wrestling nations of the world and they even hosted the world wrestling championships in New Delhi in 1967. Pehlwans who compete in wrestling nowadays do train in the grappling aspects of other martial arts such as judo and jujutsu. Legendary wrestlers like Karl Gotch went to India to learn the art of pehlwani and to polish their skills.

Milk and ghee are regarded as the most common diet to the wrestlers, other diet includes almonds, chickpeas, apples, wood-apples, bananas, figs, pomegranates, gooseberries, lemons, and watermelons. Orange juice and green vegetables are also recommended for also not all but some pahalwan do consume a lot of meat for it’s protein to help with muscle building. Other diet discipline includes no sour or spiced foods and no alcohol and tobacco.

Image Taken from: pakistaniat.com
Posted by Unknown at 8:36 PM