From The Pros - Tai chi 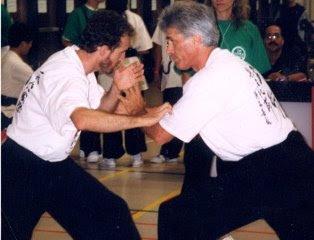 Name: Mark Small
Type of Martial Arts: I practice taijiquan or tai chi chuan as well as hsing I and baguaquan. When combined as in practices of lo he ba fa, the Fu family systems, or Chen Pan Ling's composite forms classical literature refers to them as nei jia ---internal martial arts.
My current teachers, Shou Yu Liang of Vancouver and Chen Yun Ching of the Republic of China have ranked me as a black sash. I'm a 5th generation Yang Family and 1st generation Ling Yun Pai sifu.
Years of Training: over 40 years.
How You Started: I began in the Bruce Lee craze of the 1970's. My first Yang Family style teacher was Master Choy Kam Man of San Francisco who's father, Choy Hok Pang was the first teacher sent by Grandmaster Yang Ching Fu to teach in America. A also trained in Chen Pan Ling's taijiquan in the early 1970's because it had more expressive spiraling energy and martial import. This composite form allowed me a quicker grasp of hsing I and baguaquan. I also practice Sun style and the compulsory 42 forms.
Why this martial art is good: The internal arts of China are well rounded. There is something for everybody. Though popular when practiced for improving health, taiji in particular has a sport application called push hands or tui shou. This amounts to sensitivity training for close range grappling. When used for self-defense or fighting more whole body techniques that include shuai or throwing are used. This is called san shou. Health, sport, and self-defense are graduated plateaus in Chinese philosophy and a well rounded teachers trains and can relate lesson from all three areas.
Advice to Newbies: Beginners who are serious about practice can best learn from a number of teachers and particularly from those that utilize classical principles such as connecting, interpreting, issuing, and returning an opponent or partner's intrinsic energy. Taijiquan, literally known as the "grand ultimate fist", combines straight line with circular movements in sophisticated combinations to respond to the initiative of a partner or opponent, never in a reactive manner. That way you use their weight, balance, and energy to make them feel like they are defeating themselves. Solo form practice compliments partner training. Visualize someone to engage with in front of you during solo form practice. Conversely, when engaging with an opponent move from the empty state known as wuji that comes before the separation of yin and yang in your body. Develop your whole body as your fist (chuan or quan). From Yang Family practices sense a contra-lateral yin and yang separation that links your left side leg with your right side arm and visa versa. Taijiquan always uses two hands and when one part of your body moves subtly and internally, every part of your body moves --- I tung chuan tung. Loosen your joins to do this ---song, as all taiji is gentle or looks effortless to begin with.
Posted by Unknown at 10:45 PM

Labels: From the Pros, Tai Chi