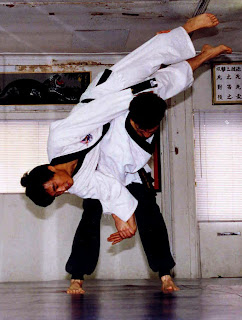 Hapkido (Hap - Joining / Harmony) (Ki – Internal Chi) (Do – Way) which translate to the way of joining the energy contains both long and close range fighting techniques.

Hapkido to me is like a son of Jujutsu and a brother to Judo, as Hapkido is like a Korean version of modified Jujutsu. As most Korean martial art lover might know, Hapkido is consider as the great grandfather of Taekwondo which was evolved from Taekyeon.

If you are a nunchuck lover you might love this art as well, Hapkido is one of the few rare martial art that uses weapons such as rope and nunchuks, besides this two other weapons also consists of cane, short stick, staff and sword.

Hapkido emphasize on non-resisting movements and circular motion which is quite similiar to taichi where the are will try to avoid using strength against opponent’s strength but using the footwork and body positioning as an advantage towards the opponent.

The main principles of Hapkido is following the middle way, not like Jujutsu that focus on the soft scale or Taekwondo who focus on the hard scale, in Hapkido, it is a combination of both, from throws and locks to punches and kicks.

In the main principles of Hapkido, it is alter broken down to another 3 principles which is

1)Hwa (Non-resistance principle) – Not hitting back when attacked, but used it’s momentum towards one’s advantage

3)Yu (Harmony Principle) – Just like a flow of water, when we try to cut the water, the water will move and wrap around the blade to sink it

Hapkido derived from the Jujutsu system that was taught by Master Choi Yong Sul (1899-1986) who brought the art back from Japan, and adding additional Kicks and Striking techniques to make Hapkido whole. Later Master Suh Bok Sub who is one of Master Choi’s first student opened up the first dojang/dojo known as Hapki Yu Kwon Sool Dojang which later the name was changed to Hapkido

Master Kim Moo Hong who is another of Master Choi’s student who plays an important role in the history of Hapkido developed many other further types of kicks used in Hapkido today. Also Master Kim founded the Korean Hapkido Association and later merge the association with groups of Hapkido practitioner lead by Ji Han Jae and Myung Jae Nam to form the current Republic of Korea Hapkido Association in 1973.

Master Ji Jan Jae who is also the trainer for the bodyguards of Korean President Park Jung Hee. Master Ji incorporated kicking and punching techniques from “The Traditional Style of Korean Martial Arts” Also with the support of the Head of Security Forces, Master Ji later founded Dae Han Hapkido Hyub Hwe which is also know as Dae Han Hapkido Association which was later merged with Master Kim and Master Myung’s Association. And if you are interested to check our Master Ji’ moves, you can check out Bruce Lee’s movie called Game of Death which Master Ji co-starred in.

Image taken from: upload.wikimedia.org
Posted by Unknown at 10:24 PM