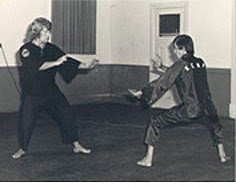 Silat began spreading in the seventh century AD but there are no records on its origin. However, it was acknowledged as a Malay Martial Art although there are influences by the Chinese and Indian cultures as well as other ethnic groups. Silat was used as a combat art as well as a folk dance when the Muslim spread through the Malay archipelago in the fourteenth century. It was developed in Brunei, Indonesia and Malaysia as an art to liberate themselves from the Colonials such as the Dutch and the British.

In the West Sumatra silat was known as silek and was the oldest men's tradition to perform the Minangkabau folk dance of randai. In Malaysia and Brunei, one form of silat known of silat pulut and silat cakak.

Most of the silat schools have few objectives and the most common one is “The art of knowing one self’. Silat consists of 2 forms, the soft and the hard which is also known as Flower (Bunga) and Fruit (Buah). Flower is normally used to confuse the opponent where Fruit is the strike and each schools will have both form applied in their martial arts but it really depends on the amount of the focus.

Image taken from: tuina.com.au
Posted by Unknown at 7:58 PM