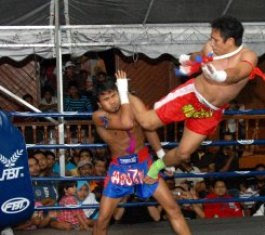 Muay Boran or Ancient Boxing is the Great Grandfather of Muay Thai. There are a few styles of Muay Boran developed from the different regions in Thailand. These styles are known as Muay Thasao (Northern Region), Muay Korat (Eastern Region), Muay Lopburi (Central Region) and Muay Chaiya (Southern Region).

Muay Thasao – Emphasis on speed in their kicks and punches.
Muay Korat – Emphasis on the Power of the Blow.
Muay Lopburi– Emphasis on technical movements.
Muay Chaiya– Emphasis on posture and defense. And focus a lot on Knee and Elbow Strikes as the focus are more towards a close body combat.

Surprisingly to say, most of the teachers of Muay Boran are Buddhist monks. It reminds me the comedy called Hot Shots where the main actor was living in a Buddhist Monastery and doing kickboxing and instead of using a glove, they used a cloth to bind their hands to reduce the risk of fracturing bones. Going back further in history, the fighter would dip the binding with resin and broken glass to produce more stunning and deadly blows. These Monasteries or temples held Muay Boran competitions during festive occasions since all Thai man are expected to be ordained as a monk for a short period in their lives.

Traditionally, after completing training in Muay Thai, a student will be taught Muay Boran when reaching an advanced level, but this is no longer the case because most of the moves are banned in professional Muay Thai as it can cause serious damage or even death. In Muay Boran, everything goes and even a kick to the groin is allowed. Therefore there are not many schools that are willing to teach this art of self defense.

Muay Boran techniques focus on the damage each blow can affect the opponent and strongly emphasize using powerful knee and elbow techniques. Each blow to the opponent should be at full force to knock the opponent down on the ground.
Posted by Unknown at 9:27 AM