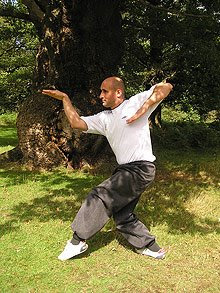 Fang Qi Niang’s Father is a martial artist of the southern martial arts from China, and since young Fang has been studying the martial arts form, it was when Fang saw a crane nearby when she was doing her chores, afraid that the crane might disturb, Fan tries to chase the crane away by using a stick.

No matter how hard she try, she cannot hit the crane, instead the crane counter her attacks. Fang later studied the crane’s movement on dodging and counter attacks and combined with the styles that she has been practicing since young and founded Fujian style White Crane Boxing.

The White Crane Boxing style has a massive influence in other styles of martial arts like the Five Ancestors Fist and Karate that not much of us might know. But if we refer back to the Kata forms like Hakutsuru or Kyusho in Karate, the influence would look quite obvious. It was believed that it was brought into Japan from tea merchants that brought the style in from China to Okinawa.

Another style of White Crane boxing is originated from Tibet, that was brought into China by Sing Lung, a Tibetan Monk and he taught all his martial art knowledge to two of his main student Wong Lam Hoi and Wang Yan Lam. And the linage was carried down by Wong Lam Hoi.

And Wang Yan Lam who was the eldest of the Ten Tigers of Canton, exchanged knowledge of this White crane style with Master Wong Kei Ying who is the founder of Hong Kuen. and it was later mixed with the Tiger Fist to form Tiger Crane Paired Form Fist and the Five Element techniques.