From The Pros - Taijutsu 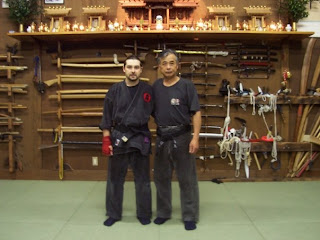 Years of training: In the Bujinkan 16 years, in total officially 23 years (unofficially its 28.)

How did you start: it started with family members who did Karate teaching and training me at home because i was officially too young to join a Dojo, when i was old enough i joined a Karate Dojo and it went on from there, i tried a few other arts while continuing to train in and progressing very well in Karate until i was invited to the Ninjutsu Dojo my friends had joined. My first lesson changed my outlook on everything i had previously learn't, as i continued to train i had major personal conflicts between the training and naturally began using my newly learn't Taijutsu instead of the drilled and conditioned 'Style' i had been doing all my life. i made a decision and left all my other martial arts.i still cross train now and again, but my outlook is now from a Bujinkan/Budo point of view, so really i guess i don't actually train in anything else anymore! a butterfly can't become a caterpillar once its changed!

Why you think this art is good: This art is so diverse, We use the bodies natural movement, we don't have rules and if we do we usually break them!, if there ever was a box we think out side of it, when you think you've learn't something from this art...another facet emerges!

Advices for newbies: Don't take advice from anybody, Don't trust anybody who says this Martial art is better than that art, do a martial art that works for you and that you enjoy!

I don't claim to be a pro, I'd be very cautious of any instructor who does.

From a Ninjutsu point of view, be careful with what information is being bounced around, especially on the Internet as a lot of it is incorrect and misleading.

Questions are good, question everything, cross reference things from reliable sources, ask your instructor, senior grades from other Dojo, if still in doubt- directly from the Honbu.

Find a good instructor who is also a student, a teacher who never learns shouldn't be teaching. they should "go to the source" (i.e. train in Japan regularly, trains and shares information with people who go to Japan regularly ,etc)

Labels: From the Pros