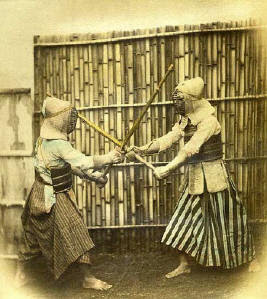 Kendo is known as “The way of sword” or Japanese sword fencing was a Martial Arts technique that evolved from Kenjutsu. Before every class starts the Practitioner has a do a Mushin or a meditation because kendo have a very strong influence from Zen Buddhism, this process allows the practitioner to empty their mind and getting ready for battle.

During the Kamakura period (1185-1233) sword fencing is known as one of the most famous “Armed Martial Arts” in Japan and in order for the Samurais to practice this martial arts, they invented the bamboo sword (Shinai) Protection Gear (Bogu) during the Shotoku Era (1711-1715) and it was used up to today. The protection gear is now more refined by having metal grills on the “Men” and extra thick cotton protecting the “Kote” and since then Kendo can be practice at full force without having to fear of injuring your sparing partner.

Dai Nippon Butoku Kai established in 1895 promote, and standardize martial disciplines in Japan and in 1920 the name of Gekiken was amended to kendo. In 1946 all Martial Arts in Japan was banned in 1946 in response to the wartime militarization of martial arts in Japan and in 1950 Kendo was returned to all it’s people as Shinai Competition.

Image Taken from: www.likendo.com
Posted by Unknown at 8:03 PM