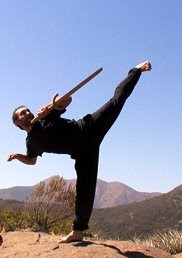 Tibetans are well known worldwide for Tibetan Buddhism and it seems that their martial arts have something to do with meditation as well. Boabom is a type of martial art that do not focus too much of attacking, but the main focus is Defense itself, besides defense it also focus on Meditation and Relaxation.

Boabom is influenced by Chinese martial arts and also Indian yoga, therefore if you check the stance propelly it looks more like Chinese Kung Fu. Boabom is an art that was initially treated more like a family heirloom and still are up to today. It is also said that the martial art itself is a way of life.

Boabon is generally consists of 3 teachings:

Osseous Boabom - It’s also called as the Art of Self-Medicine through Self-Defense. This teachings focus on the practice of fast reactions, agility, self-control, balance, speed, precise reflexes, breathing and concentration. Also, the teachings are taught in a progressive way where each new movement learned is linked to the previous.

Yaanbao - Is a practice that uses of implements like sticks in different length and shapes. In this teaching the practitioner studies on how to perfect their movement.