Introduction to Jeet Kune Do 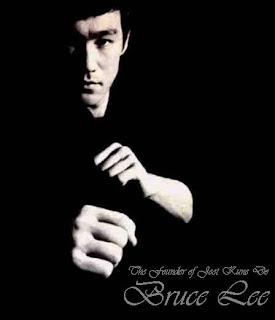 JDK or more known as Jeet Kune Do if a philosophy developed by my Idol Mr. Bruce Lee, it was named in year 1967 after Master Lee merged in all his training from different schools to form Jeet Kune Do and he taught all his student the philosophy in developing this Martial Art which focus on simplicity, directness and adaptation to free the fighting style from limitations due to different styles of martial art.
Basically Jeet Kune Do is a school that focus on “The Style of No Style” Jeet Kune Do also focus on the centerline of both the opponent and the practitioner which was adopted from Wing Chun. This basically allow the practitioner to Attack and Counter at the fastest speed possible additional to Wing Chun The footwork of French Fencing plays as one of the main pillar for JKD as it is all about speed additional to it the exercise and punches taken from American Boxing. All this 3 is the “Core Pillar” to JKD with additional of mixtures from other styles of Martial Art.
Unfortunately to say the actual Martial Art that was opened by Master Lee was closed approx 2 years before his tragic death. All the rest of the Jeet Kune Do schools now are opened by Master Lee’s apprentices. JKD which was split into 2 Groups are Jun Fan Jeet Kune Do and Jeet Kune Do Concept Schools Jun Fan Jeet Kune Do are opened by Masters like Taky Kimura, Jerry Poteet, and Ted Wong where these Dojos claimed to teach only what was taught by Master Lee himself and encourages it’s practitioner to develop their styles from there through their abilities.
Where else the Jeet Kune Do Concept Schools has another approach where Masters like Larry Hartsell and Dan Inosanto strive to continue Master Lee’s philosophy of individual self-expression. Where the style that was taught continued to evolve up to today and the students evolve and grew with the school.
No matter which school you choose to join, JKD’s practitioner has 4 combat ranges which was evolved from different schools, the ranges are kicking, punching, trapping, grappling and all have to be practiced equally. Because all of the school focus on one same philosophy which is the “Style of No Style”
Posted by Unknown at 12:32 AM