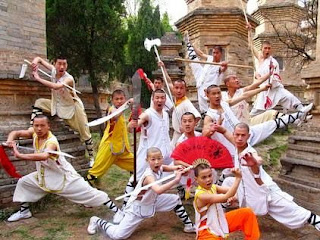 There used to be a saying in China back in the ancient days that Martial Arts around the world (the world that it refers to is China only) came from Shaolin. Martial Arts like Wing Chun, Hong Ga are all samples of martial arts that were taught to the Grand Masters from Shaolin.

The most famous Kung Fu Monk from Shaolin that most Chinese might know is “Dat Mo” or Bodhidharma, It was believed that Martial Arts in China is divided into 2 categories, the External Martial Arts and the Internal Practice (Qi Gong) and most of the credits on the internal practice goes to “Dat Mo”. It was believed that while in his stay in Shaolin Monastery, he has been staring at the wall for 9 years and at the end of the 9th year, a hole was found on the wall that he has been gazing but we cannot find further proof of that. Huiguang and Sengchou in the other hand is credited on the growth of the External Martial Arts, Both of them are Martial Artist before they were ordained in the monastery and they were reported to be the first few monks that is in Martial Arts.

Most of us might think, aren’t monks not suppose to fight? Or aren’t monk suppose to be holy schmoly? This is a misconception of a lot of people, monks learn Martial Arts to defend themselves and they take it as a practice to train endurance, focus and for health purpose. It started even back in Tang Dynasty (618 - 907AD), Monasteries are being attack and robbed from bandits and pirates, pushed around by the governments to seize their lands and so on, and these monks are doing nothing more than just defending their place. Therefore the culture stays with the monastery and it has become a daily routine for the monks in Shaolin to practice Martial Arts.

Image taken from topic.chinaa2z.com
Posted by Unknown at 7:51 PM