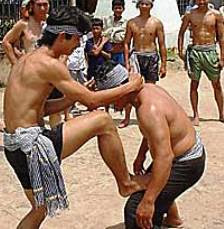 Bokator or Labokatao is a martial art that uses not only body combat but it also include using weapons and ground techniques. Labokator mean wield a wooden sword to fight a lion or fight like a lion not really sure which is correct though.

According to books, Bokator is one of the earliest form of martial art in Cambodia, just like Chinese Kung Fu, the martial art is based on animal forms like duck, crab, dragon, bird, horse, lion, elephant, crocodile, monkey king and many many more. And the weapons used are double stick, double swords, long staff and scarf.

Bokator came when a warrior who defeated a lion bare-handed some 2000 years back but I cant get further details in this. According to wiki, this martial art emerge during the Angkorean kings with Indian influence as martial arts that imitate the form of Animals has been even longer in history that was practiced in India.

During 1975 – 1979 those who practiced this traditional martial art were either exterminated by the Khmer Rouge or went for refuge. San Kim Sean is credited to be the Father of Modern Bokator, as he revived the study of Khmer Bokator in Cambodia. San had to flee Cambodia to United Stated later after being accused by the Vietnamese on forming an army. He soon return home to Cambodia to continue his task in 1992.

He move back to the capital of Cambodia in year 2001 and at the same time search for the Instructors for Bakator who survived the regime, unfortunately they are at a very old age and some were afraid to teach the art openly to the public even approved by the government but after much persuasion these masters agreed and Bokarto was reintroduced to the people.

The first Official National Bokator competition was held in September, 2006. The competition involved 20 leading teams from 9 provinces in Cambodia. Unlike kick boxing or Muay Thai, which is a fighting art, Bokator is more like a soldier’s art, designed to be used on the battlefield.

Bokator’s focus more on elbow, knee, shin kicks and wrestling and it is known that the practitioner can even use jaw or fingers to fight. When fighting, Bokator practitioner’s uniforms looks like the MuayThais’. There is a scarf is folded around the waist called krama, which suppose to signify the level these practitioner are, if not mistaken the Gold Krama is suppose to be at the top of all these grades.

Up to date, there is only 2 NON-LOCAL Bokartor practitioner that attain the rank of a Black Karma. In actual Bokator battles, you are not allowed to wear don’t wear gloves and you can fight on the ground, and the fight ends in either one of the fighters submit or chokes.
For those who are interested to contact Master San Kim Sean you can email Antonio at antonio@speakingadventure.com
Posted by Unknown at 11:38 PM