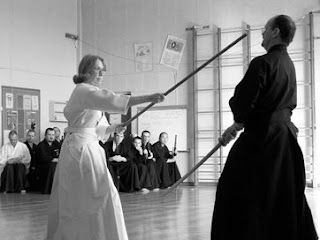 Jodo also known as jojutsu is a type of armed martial arts that uses short staffs called that is called jo which is about 3-5 feet long. This art is focused on Defense especially against sword and not that much on the Attacking side. There are 2 branches of Jodo called Koryu and Seitei Jodo and now this are very famous among Japanese Police and was refered as keijojutsu (police stick art)

Jojutsu is an exclusive martial art of the Kuroda Clan until the early 1900s, then the art was taught to the general public. It started back to the late 16th Century, where assassination and murder is common in Japan at that time. The Founder Muso Gonnosuke was a warrior who had trained in several Martial Arts school as well as a Shinto Priest training in bojutsu or the art of long staff. Gonnosuke is also a legend that is always compared to Miyamoto Musashi (also known as Sword Saint) as both are undefeated in battlefield.

Gonnosuke is believed to challenge Musashi twice which he won the challenge the 2nd time after Gonnosuke took up concepts from spear, halberd, staff and sword he developed what eventually became known as today’s JoJutsu. After Gonnosuke won the match against Musashi his reputation grew overnight and started to teach his art of Jodo. It is also where further refinements came and over the centuries his students added in other weapons and forms to form a complete school of combat.

Image taken from: hugin.demon.co.uk
Posted by Unknown at 12:54 AM